Why a Mug is the Perfect Christmas Present 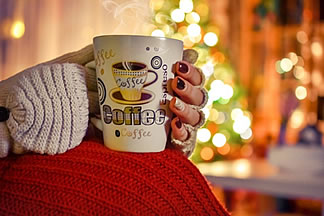 Christmas is upon us again, and we're gearing up for plenty of festive cheer with family and friends - but what are we going to buy them? And why do we exchange gifts at Christmas anyway? Here we take a look at the controversial Christmas tradition of gift-giving, and find out why a mug could be the answer to all your wishes!


Why do we give gifts at Christmas?

The tradition of giving gifts at Christmas is thought to be representative of the gifts given to the Baby Jesus by the Three Wise Men. However, it could have its roots in the Roman winter festival of Saturnalia, which was held from 17th -23rd December each year. Eating, drinking and gift-giving formed the main highlights of this annual celebration.

It wasn't until the 19th Century that gifts were regularly given at Christmas itself, however, when Queen Victoria gave her husband and children presents on Christmas Eve. Prior to this, gifts were traditionally exchanged on New Year's Day, but Queen Victoria was such a popular figure around the world that her family custom was adopted as a central part of the Christmas celebrations.

Today it would be impossible to imagine a Christmas without presents, even though some Christians believe that this is diluting the true religious meaning of the festival. Of the 2 billion people who celebrate Christmas around the world, however, many are not Christians - Santa, presents and decorations can even be found in Buddhist countries such as Thailand. Christmas is seen by many as an important cultural and social festival, with gifts for family and friends at its heart.


Where does Santa Claus come from?

In the UK, as in many other countries around the world, we're used to the sight of Santa Claus with his red tunic and long white beard, bearing gifts in a sack. Santa Claus, or Father Christmas, has his origins in the figure of St Nicholas, who is known as the Patron Saint of Children in many Christian religions.

However, who you receive your presents from at Christmas largely depends on which country you live in. Children in Italy receive their gifts from La Befana, an old lady who wears a shawl and rides a broomstick. Gifts in Germany and Austria are said to be given by Christkind, an angelic infant representative of the Baby Jesus. In Iceland, the mischievous Yule Lads - thirteen gnome-like creatures - are known for playing tricks at the same time as distributing Christmas gifts, while French children who have been naughty are warned that they might receive a visit from La Pere Fouettard - a fearsome figure rumoured to have cooked his kidnap victims in a stew!


What to buy those difficult relatives?

Of course, once we reach a certain age, Santa doesn't come to us anymore, and we're left wondering what to buy our friends and relatives each year! In this age of extreme consumerism, sometimes more traditional gifts are hugely appreciated by those who receive them. Mugs can make ideal Christmas presents - not only are they a constant reminder of the person who bought them for us, but they can also easily be filled with other small thoughtful gifts including:

You can find an extensive range of Christmas-themed mugs perfect for gifts at Express Mugs, which you can browse here - we wish you all plenty of good cheer and hope you have a wonderful festive season.