(Trick or) Treat them to a mug this Halloween! 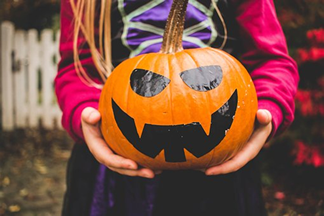 Love it or loathe it, Halloween is upon us again - and with it comes all the fun (or annoyance, depending on your point of view) of trick-or-treat. But what are the origins of this strange custom? Many people assume it is a tradition that started in the USA; but in fact its origins are much, much older than that. Come with us on a scary ride as we explore the history of trick-or-treat... Scaring the evil spirits away

One of the hallmarks of trick-or-treating is dressing up in scary costumes. This tradition has its roots in the Celtic festival of Samhain, which pre-dates Christianity - it was celebrated on October 31st, over 2,000 years ago. The Samhain festival celebrated the end of summer and honoured the dead, and villagers would gather around huge bonfires and offer food to keep any visiting spirits happy. Often the revellers would use animal skins to disguise themselves in case any unfriendly spirits paid them a visit!

By the Middle Ages the influence of the Catholic church was widespread throughout Europe. The festival of Samhain was transported into a three-day Christian celebration of saints and the dead:
- October 31st - All Hallows Eve (or Hallowe'en for short)
- November 1st - All Hallows Day, or All Saints Day
- November 2nd - All Souls Day


This religious festival was accompanied by the community tradition of "souling" - knocking on doors throughout the parish, offering prayers for the deceased in return for gifts of food. This tradition was being practiced in many European countries as far back as the 10th Century.

Often the children would dress as demons, ghosts or angels, a custom soon adopted by adult locals who would go "mumming", giving impromptu performances of various tricks in return for food and drink.

The traditions of mumming and souling gradually evolved into an early form of trick-or-treating in 11th Century Scotland and Ireland. Here it became customary for young people to go "guising", dressing in costume and going door to door singing, telling jokes and performing tricks for gifts of food and money.


Trick-or-treat in the modern day


The phrase "trick or treat" is believed to have been first used in the United States in 1927. By this time the tradition of "guising" was becoming well known in the States due to the large numbers of Scottish and Irish immigrants arriving there. The American children took things one step further, waiting at both front and back doors of homes in large groups, demanding sweets for nothing - otherwise the residents could expect some "fun" to be had with various items of their property!

Trick-or-treat techniques became gradually more sophisticated during the 1930s, until they resembled protection rackets - the Reno Evening Gazette reported on November 1st, 1938, that trick-or-treaters "extracted candy fruit from Reno residents. In return the youngsters offered protection against window soaping and other forms of annoyance."

Sugar rationing during World War II meant that children were prevented from trick-or-treating, but the practice resumed with a vengeance during the post-war baby boom. Confectionary companies quickly realised the huge potential for profit, and launched Halloween advertising campaigns, beginning the growth of what has now become a $6 billion industry in the US.

In the UK, the American version of trick-or-treating has gradually gained popularity since the 1980s. However, British adults are far less enamoured of the tradition than our American cousins. Research shows that up to 58 percent of UK homeowners leave their lights off and pretend to be out on Halloween, just to avoid the trick-or-treaters! One thing's for sure, however; whether you love it or hate it, it looks very much as if trick-or-treat is here to stay.

If you're a Halloween lover and you're looking to give the trick-or-treaters some extra value this year, why not give them their sweets in a mug? That way they can take home something they can keep! Alternatively, if you're a hater, you can always keep the mug for yourself and curl up by the fire with a cuppa - with the lights off, of course!